I think it’s safe to say that giving is important to me. (Hi, here’s my blog about it.) But that doesn’t mean I’m good at it. Parenting is the same way. It’s important to me, but there are times that I overwhelmingly feel like I’m failing. Put the two together and it leaves you feeling pretty low.

Upon picking the boys up from Vacation Bible School today, they handed me a list of Offerings they would be collecting this week. Awesome! I was so excited to see that giving would be incorporated into their daily lessons. And since one of the most effective ways for the boys to learn to give is by doing, I wanted to incorporate them into the process. I reviewed the list to see where we could start…

Monday – hugs and handshakes (Okay, we’ve got that covered. Give Love. Something 5 year olds are great at!)

So off we went to the pharmacy to pick up the first aid items. First the boys fought over who got to carry the basket. Before we even entered the store, a stranger stopped and said “You’ve got your hands full”, something I hear constantly. If you’re keeping track of things not to say to a triplet parent, add this to the list. It is not encouraging. So after much yelling to the boys to stay with me and to put things back on the shelves, we finally made it to the first aid aisle.

I took this photo while the boys were fighting over As Seen on TV toys and were begging me to buy them all. Clearly this whole lesson on giving was sinking in. Oh, and they broke off two large price signs in the process.

After more frustrations, we made it out alive and headed next door to the supermarket to buy the non-perishable food. I didn’t want to just take something from our pantry. I wanted to talk to the boys about giving while picking out the food and focus on the people we were buying for. Instead, they each grabbed a child-size cart, raced through the store, kept slamming them into each other and the back of my heels. Needless to say, I heard about 10 more “You’ve got your hands full” comments. Fighting, yelling, packages being knocked to the ground, no one was listening to me. I was done. They lost their treat for dessert. My heart had turned from excited and encouraged to done.

As we got home, I asked the boys to help package up the food so they could take it to VBS tomorrow. 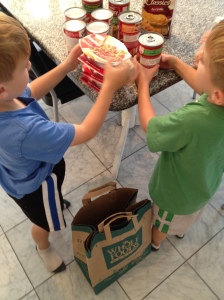 This photo looks like they are helping, but in reality, they were hoarding food, fighting with each other saying “the cans are miiiiiiiiiinnnnneeee”. I couldn’t even get the third boy to help. Imagine the loving, giving heart they are learning when I yelled “This is not about you! It is important for you to want to give!”

So there you have my very real parenting fail in my attempt to teach the boys the importance of giving. I am off to ask them for forgiveness for losing my temper and try again.

My encouragement comes from a conversation I had earlier today with one of the founders of Impact Foods (much more on them later). Here was a 26 year old, who started a company because he wanted to give back. Why? His mom taught him the importance of philanthropy and loving others by volunteering at food banks, giving back through the community, etc from a very early age. My hope is that these small things I’m doing with the boys, albeit covered in failure, will add up over time.

Here’s to hoping the spare change for Blood water Mission and clothing donations go much smoother.

One thought on “My (failed) adventure in teaching kids to give”

Disclaimer...Just kidding, there is no disclaimer. I'm not paid to write about any of these awesome organizations, nor has any given me any products to hail. But you're welcome to. Just shoot me an email. Until then, anything you read is just my genuine opinion and desire to highlight the work of others.
%d bloggers like this: