Yesterday, my friend* passed along the article New England: The Least Charitable Part of the Entire Country (by Dave Eisenberg), based on The Chronicle of Philanthropy’s How America Gives Report. 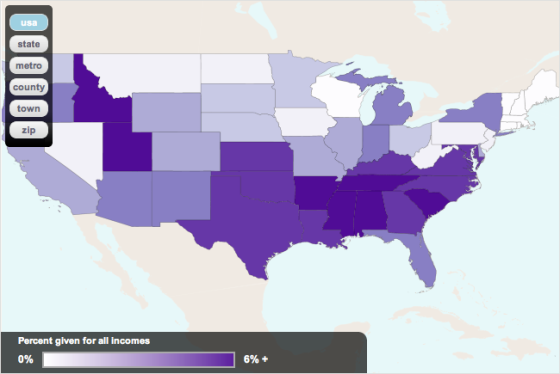 But check out Chronicle of Philanthropy, How America Gives for the interactive version.)

This makes me so sad. Massachusetts is in my blood. I was born here. Raised here. And after a few adventures across the country, now live here again.

Why do we give such a small percentage of our income? The Chronicle of Philanthropy reviewed their data to try to uncover factors that contribute to giving. I highly recommend the article (read it here). A few of their findings: the rich aren’t always the most generous, red states give more than blue, take advantage of a tax incentive, and (my favorite) religion has a huge impact on giving generously.

Religion has a big influence on giving patterns. Regions of the country that are deeply religious are more generous than those that are not. Two of the top nine states—Utah and Idaho—have high numbers of Mormon residents, who have a tradition of tithing at least 10 percent of their income to the church. The remaining states in the top nine are all in the Bible Belt.

My favorite biblical lesson about why it is more important to give a large percentage rather than a large amount of your money is the Widow’s Offering.

41 Jesus sat down opposite the place where the offerings were put and watched the crowd putting their money into the temple treasury. Many rich people threw in large amounts. 42 But a poor widow came and put in two very small copper coins, worth only a few cents.

43 Calling his disciples to him, Jesus said, “Truly I tell you, this poor widow has put more into the treasury than all the others. 44 They all gave out of their wealth; but she, out of her poverty, put in everything—all she had to live on.”

What I love about this is that the amount given is not what is important, it is the percentage. It is the widow’s intention. It is her generous heart to give all that she had because she wanted to. She was a cheerful giver that was not required to give, she was not reluctant to give, but gave freely.

So how do we change our hearts so we desire to give to help others?